NASTY WOMEN NEGOTIATE: how to “grab ’em by the payroll” 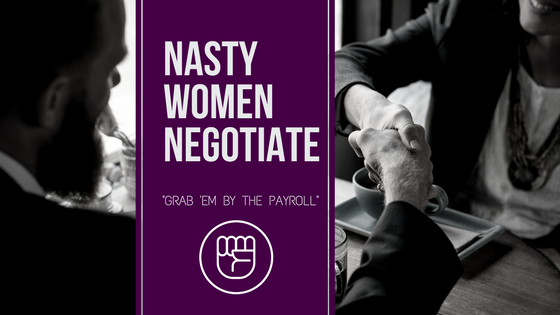 The Women’s March on Washington last year re-ignited the fight for gender equity in women across the globe. If you are yearning to make your mark in this battle too, you need look no further than your 9-to-5.  The amount we, as women, get paid for the work we do in the world is a fundamental feminist issue.

Women continue to be unfairly compensated in the workplace. As of 2015, a women working in North America typically earned between 72 to 80 cents for every dollar a man earned doing similar work. This has got to stop.

Whether you’re a barista, an administrative assistant, or if you’re the Chief Executive yourself, salary negotiation is a vital feminist act.

There are many reason for the gender pay gap but a large reason employers get away with paying lower wages to women is because men negotiate for more money and women often don’t. If you are not negotiating, you are partly responsible for wage inequality. Think about that.

And I get it…effective salary negotiation is not something we are typically taught as women. Until recently, women advocating for themselves was seen as a “gender norm violation”. In other words, demanding equal pay was unladylike. Well, fuck that noise. Those days are over.

Here’s the thing…every day you are at work you are on the front lines in the battle for gender equality. If you want to land a hit for yourself and for women everywhere, you have got to negotiate for more money. It’s that simple.  It’s not always easy (or comfortable) but I can help.

Have the damn conversation already.

Women tend to find salary negotiation uncomfortable and as a result we often just avoid the conversation all together. But if you don’t ask, you don’t get. It’s that simple. One of the biggest reasons women do not get paid as much as men is because we don’t advocate for ourselves. Waiting silently to be rewarded for your hard work is what’s keeping you and other women from pay equity. It’s time to speak up, for yourself and for your sisters everywhere.

If you are new to negotiation it’s probably going to feel pretty uncomfortable when you first attempt it and that’s okay. It gets easier with experience. So be brave and get in there! The only way to avoid that awkward feeling is to continue to eat shit and smile every day, for the rest of your working life. You better believe Senator Elizabeth Warren doesn’t have a shit sandwich in her lunchbox and neither should you. Get in there!

Your fear of “conflict” is what’s keeping you in that studio apartment.

Your employer may try to base your salary on what you were making in a previous job. Don’t let them. Educate yourself on what is a fair salary for your position, skill set, and experience. All of this information is available online by location, industry, and years of experience. Google it! Just because you got paid shit wages in your last job does not mean you entitled to the same in a new one.

Carol Frohlinger, a managing partner at Negotiating Women, a company that trains women to be more effective negotiators, recommends keeping an ongoing list of any accomplishments, accolades, and contributions you’ve achieved throughout the year. Prepare a solid case for why you’ve earned what you want, how it can be implemented, AND why it makes good business sense for the company. Frolinger also encourages women to practice by doing mock negotiations. Knowing what you want to say and how you’re actually going to say will make you much more likely to be rewarded.

Power pose with your Pussy Posse.

Right before you meet with your boss spend a few minutes channeling your inner badass. This works!Go to the ladies room, find an empty stall, and stand there for 2 minutes with your feet wide, your hands on your hips, and your chin up. Connect with the fierce power and cool confidence of your favourite ladybosses; think Claire Underwood, think Beyoncé, think Michele Obama. Bring that energy with you into the meeting and you will be channeling some serious feminine clout.

There is no shame in the ask.

Some women (rightly) fear that they will tarnish their working relationship by asking for more. If you are in an organization where calmly asking for what you deserve is going to earn you a black mark next to your name, then it’s time to start looking for a new employer who will actually negotiate with you. So sit up straight, aim high, be respectful, and make your pitch, girl. There is no shame is the ask, but if you refuse to even try then you forfeit your right to bitch.

And yet she persisted.

What if your boss shuts you down? Just because you get a “No” does not mean the negotiation is over. Make sure you ask your boss how and when they will make up for this current deferral. Get your boss to be specific about what will be addressed in future and when you can expect to have that conversation. Persist.

Get It In Writing.

Finally, always follow up any negotiation session with an email to your boss outlining the details of what was agreed upon. If you don’t get it in writing, it never happened. Don’t make this rookie mistake. Even if your boss doesn’t reply to the email, you at least have the terms on record and that your boss made no correction or disagreement to those terms.

Alright girl, you’re ready. March your butt into that office and win one for Nasty Women everywhere! Go slay.

*This piece is also published with the lovely folks over at elephant journal.